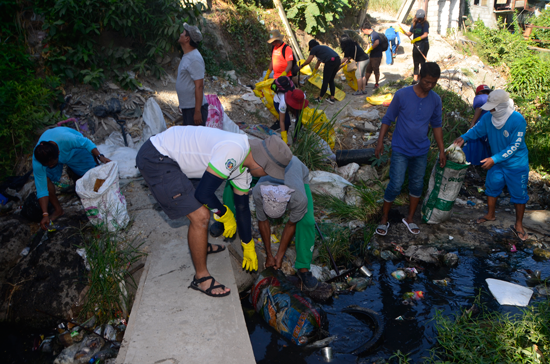 The Department of Environment and Natural Resources – MIMAROPA kicked off the comprehensive cleanup of the Zapote river in Brgy. Molino 3, Bacoor City on Wednesday (May2), at the start of the local celebration of May as Month of the Ocean.

“Today marks not only the start of our celebration of May as the Month of the Ocean but also to kick off the comprehensive clean up of the Zapote River. Pag sinabing comprehensive cleanup, talagang ‘yan ay matindi,” DENR-Region 4A Director Sofio B. Quintana said as he addressed the participants to the cleanup activity.

During that time, Quintana said, Sec. Cimatu had instructed him to clean the filthy river. And since the river, according to him, is the boundary between the National Capital Region and the CALABARZO Region, he immediately contacted Bacoor City Environment and Natural Resources Officer (ENRO) Rolando Bucalan, who agreed to undertake a joint comprehensive clean up of Zapote river.

Bucalan, who was also present in the cleanup activity, called on the residents of Brgy. Molino 3 to have a sense of responsibility to maintain the cleanliness of the river once it is cleaned.

Meanwhile, DENR-Provincial Environment and Natural Resources Office (PENRO) for Cavite Reynaldo Belen emphasized the importance of discipline in maintaining the cleanliness in the area. He also appealed that the clean-up be done not only in the barangay but also in the whole province as the wastes disposed at the upper areas will eventually flow down the low-lying ones. ###