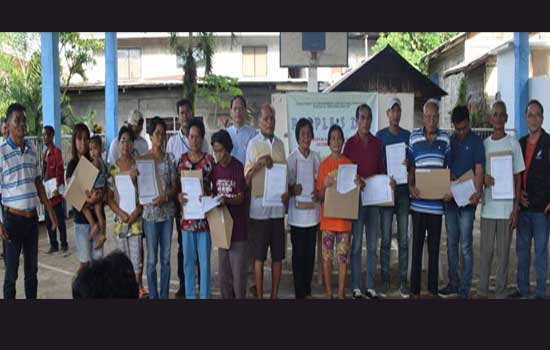 Building on the momentum of its successful distribution of land patents last year, the Department of Environment and Natural Resources (DENR) in Western Visayas has increased its target of distributing land patents to 4,478.

In 2016, the regional office was able to distribute a total of 2, 861 residential patents and 1,181 agricultural patents, thereby exceeding its annual targets by 4 percent and 15 percent, respectively.

“Our goal to provide the legal and rightful beneficiaries their much-deserved land titles has always been an important component of DENR mandate. This is not only to ensure that the country’s land resources are equitably distributed but also in alleviating the plight of our rural communities, particularly the farmers, as they now have all the opportunity and the motivation of introducing improvements in their lands to generate economic gains,” said DENR-Region 6 Director Jim O Sampulna.

The distribution of residential free patents is pursuant to Republic Act 10023, also known as “An Act of Authorizing the Issuance of Free Patents for Residential Lands” while that of agricultural patents is provided for under Commonwealth Act 141 or the Public Land Act, as amended, which aims to promote social justice and industrialization. ###