KORONADAL CITY, SOUTH COTABATO - At least 16 officers and members from two (2) People’s Organizations (POs) in Kiamba, Sarangani Province were capacitated on the dynamics of organizational strengthening in a bid to enhance the implementation of Biodiversity Friendly Enterprise (BDFE) of the Department of Environment and Natural Resources (DENR) Region XII.
This came as a result of the rapid assessment on the existing enterprises of the Kiamba Municipal Council of Women (KMCW) and the Women in Nation Development of Sarangani (WINDS) Lumoyon conducted by the Protected Area Management Office of Sarangani Bay Protected Seascape (PAMO-SBPS) with the assistance from the Conservation and Development Division (CDD) through the Coastal Resource and Foreshore Management Section and the Community Environment and Natural Resources Office (CENRO) Kiamba.
The rapid assessment ensures that the endorsed enterprise is biodiversity-friendly and within the Multiple-Use Zone. The assessment of both the beneficiaries and the area is needed to determine the relevance, applicability and acceptability of the potential livelihood options.
CDD Chief Dr. Ali Hajinasser emphasized that the office should evaluate and assist the POs in strengthening the organization and their respective enterprise.
“To be a recipient of the BDFE enhancement, the DENR through the Biodiversity Management Bureau provides indicators for a biodiversity-friendly enterprise. It ascertains that the mechanism for sustainability of raw materials is in place and should complement the conservation of biodiversity-rich areas, among others,” Dr. Hadjinasser said.
Meanwhile, SBPS Protected Area Superintendent Joy C.Ologuin in her message underscored the importance of organizational and financial strengthening as requisites for the provision of assistance from the DENR.
“There is a good percentage that the vegetable noodles enterprise of the WINDS Lumoyon and the Cassava value added products of the KMCW will be considered.
Among the essence of the BDFE is to lessen water-based enterprises so that the pressure in the coastal ecosystems will also be reduced,” PASu Ologuin said.
The BDFE will heighten the awareness and participation of the communities within and around the protected areas and other areas of high biodiversity values in the wise use of biodiversity resources.
Moreover, Ms. Theoffany Joy D. Cabanda, an assisting professional who specializes on enterprise development and organizational management serves as the learning service provider for the two (2)-day refresher training.
She underscored the concepts and principles of enterprise development organizational management, policy, systems and procedures development and basic financial record keeping.
The Kiamba Municipal Council of Women is a five-year organization with an enterprise of Cassava added value products while the WINDS Lumoyon has been organized since 2012 and has been generating income for their vegie noodles.
BDFE as defined are the economic activities and practices of micro, small and medium enterprises, local government units and POs that promote sustainable use of biological resources create wealth and value and open opportunities for the equitable sharing of benefits among stakeholders. | RHSumagpao of CDD-CRFMS 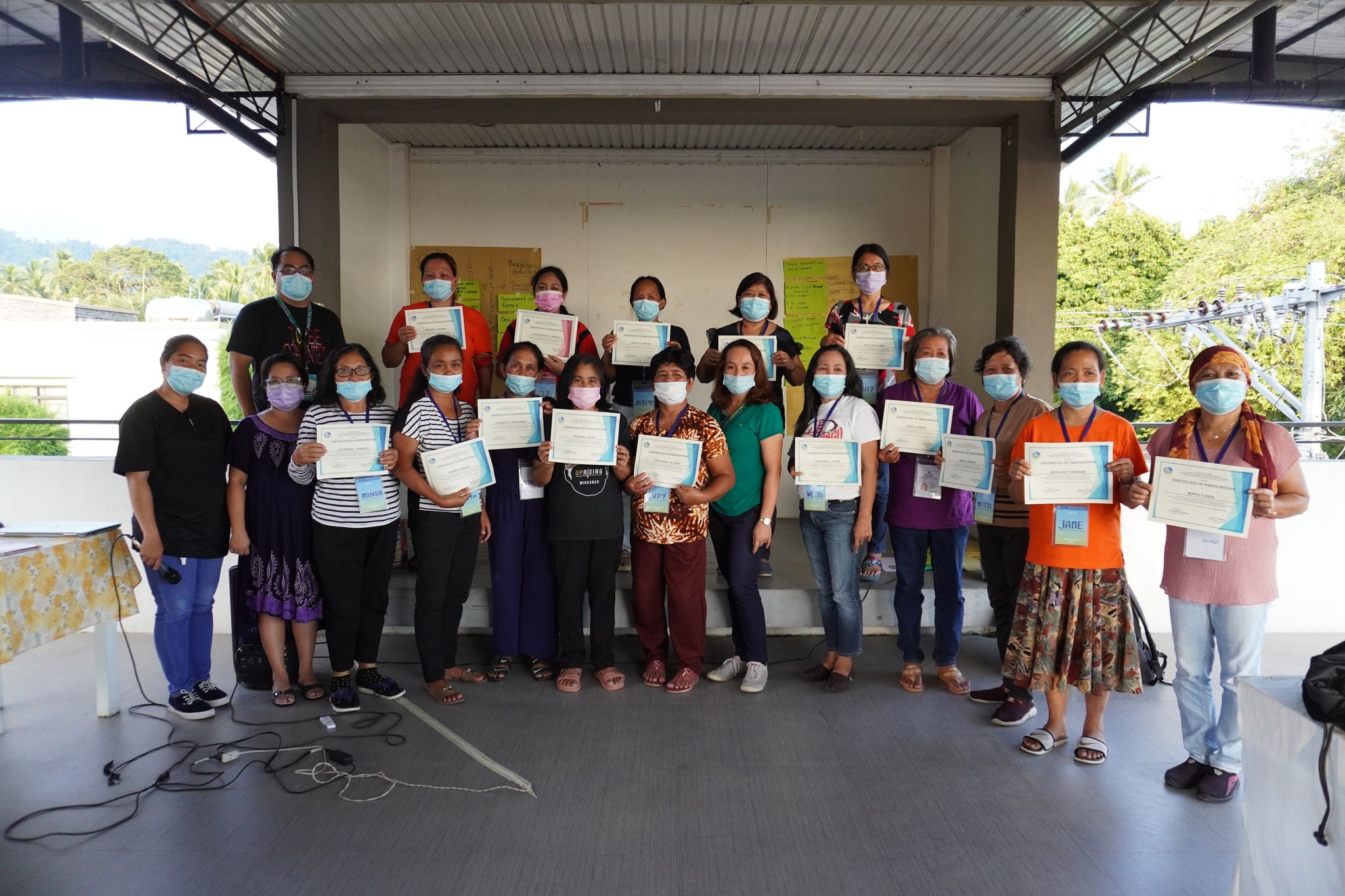 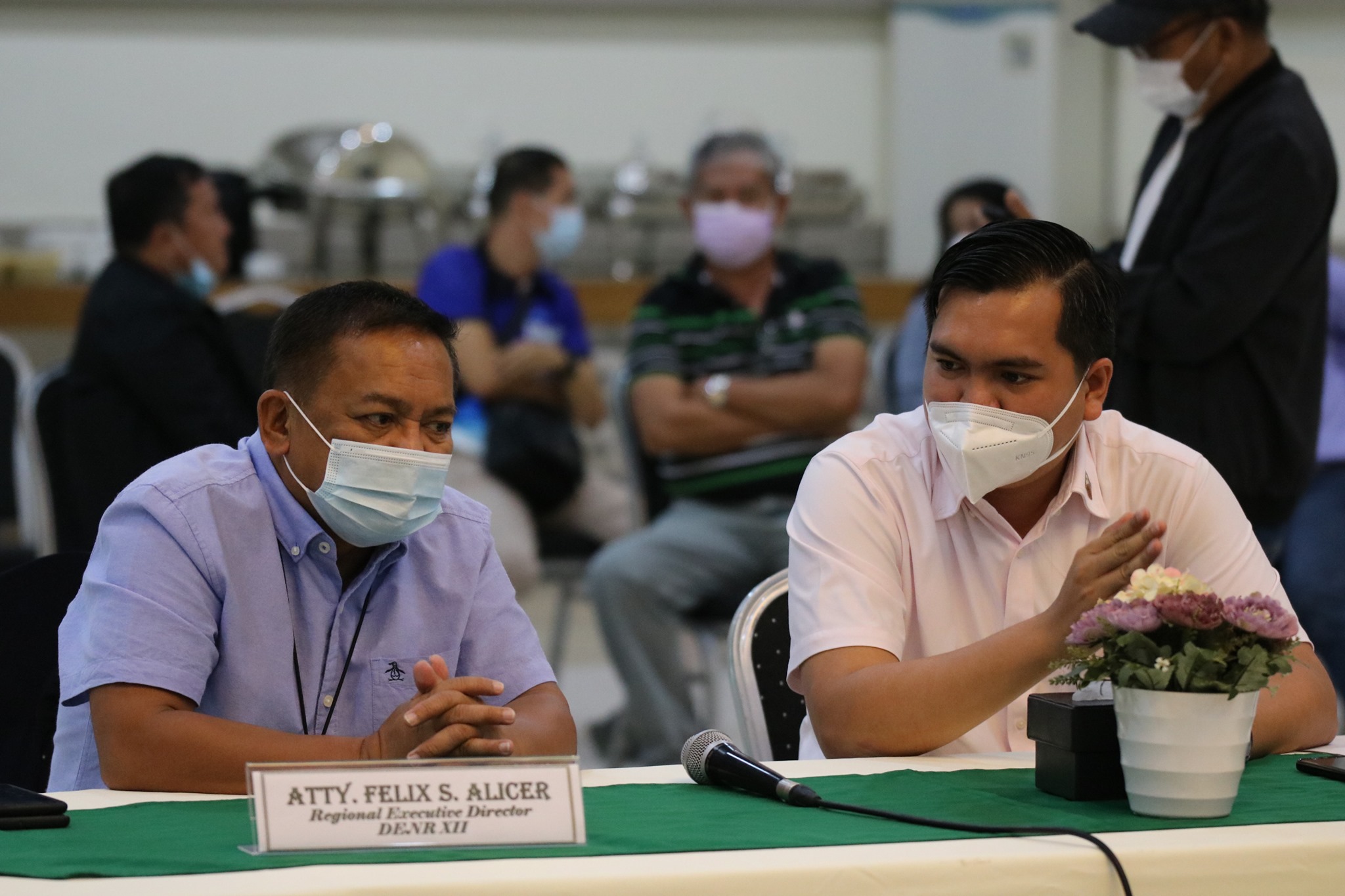 INTER-REGIONAL MEETING. In the interest of the service and in view of Environmental Secretary Roy A. Cimatu’s priority program to intensify forest protection and anti-illegal logging efforts, the DENR XII and DENR XI convene in an Inter-Regional meeting on April 29, 2021, at Koronadal City. In his opening message, Regional Executive Director of DENR XII, Atty. Felix S. Alicer commends the initiative of DENR XI for an inter-regional meeting to toughen partnership towards law enforcement of forest protection from both regions. “It is time for DENR to effectively implement the laws. There has to be coordinated efforts among regions.” Alicer emphasized. Meanwhile, DENR XI RED Bagani Fidel A. Evasco expressed his gratitude to DENR XII for hosting the meeting. He also added that their full-force presence with Provincial/Community Environment and Natural Resouces Officers PENRO/CENROs manifest serious implementation on environmental laws. “We are here to strengthen our enforcement, environmental laws, rules, and regulations”. Evasco said. The whole day meeting is set to discuss matters on illegal cutting, and inter-regional transport of forest products, including those apprehended within Mt. Apo Natural Park.| (Photos by: DYBalidong)

In line with the celebration of Month of the Planet Earth 2021 with a theme "Doing our Fair Share to Restore Earth" and Earth Day with a theme "Be Part of the Change,” a total of 2,600 seedlings were planted on Thursday morning, April 22, by the DENR-12 and its partner stakeholders in an enhancement of graduated National Greening Program (NGP) site at Sitio Besas, Barangay Malaya in Banga, South Cotabato.
In his message, DENR-12 Regional Executive Director Atty. Felix S. Alicer highlighted the significance of participating in activities that promote protection and conservation of the Earth.
“Activities like this cannot rapidly alter the environmental problems that we are facing. However, this spreads awareness to the public that in a small way, we are continuously doing something,” he said.
ARD for Management Services Bighani M. Manipula, Ph.D emphasized that the climate change can really be felt as typhoons are now getting stronger and the need for safeguarding our forests is needed.
PENR Officer of South Cotabato Radzak B. Sinarimbo said that everyone has a responsibility to mother earth and if we take good care of our environment, our nature will also take good care of us.
Meanwhile, CENR Officer of Banga Abunawas B. Abduladsis and NGP Regional Coordinator Forester Jamel C. Tawan tawan expressed their gratitude to all the participants from the DENR-12 and barangay local government unit (LGU) for taking part in the very significant environmental activity.
The program was also attended by Banga Municipal ENR Officer Rommy C. Villa, BLGU officials of Malaya and other partner stakeholders.
Protocols on COVID-19 were followed during the conduct of the said activity. 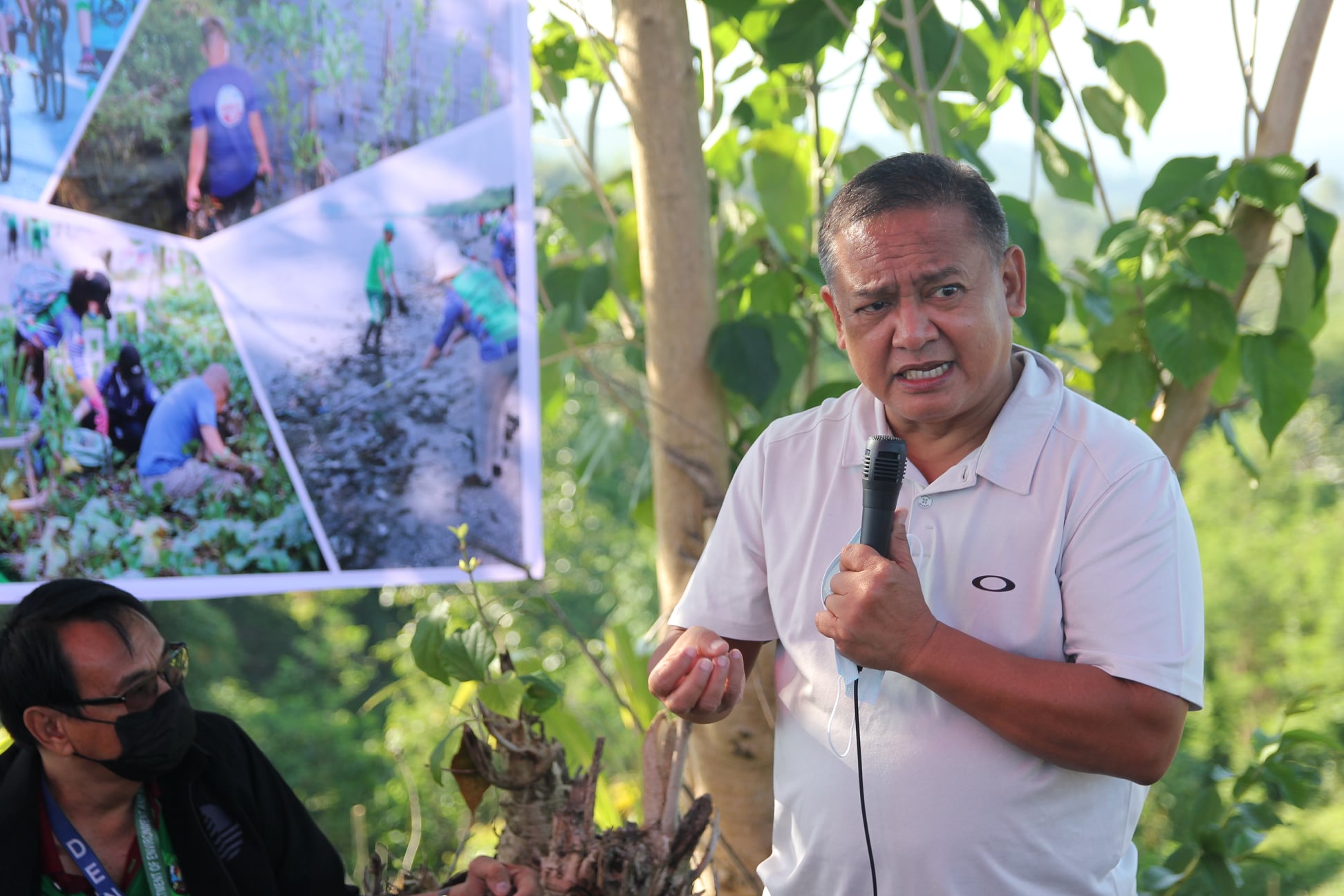 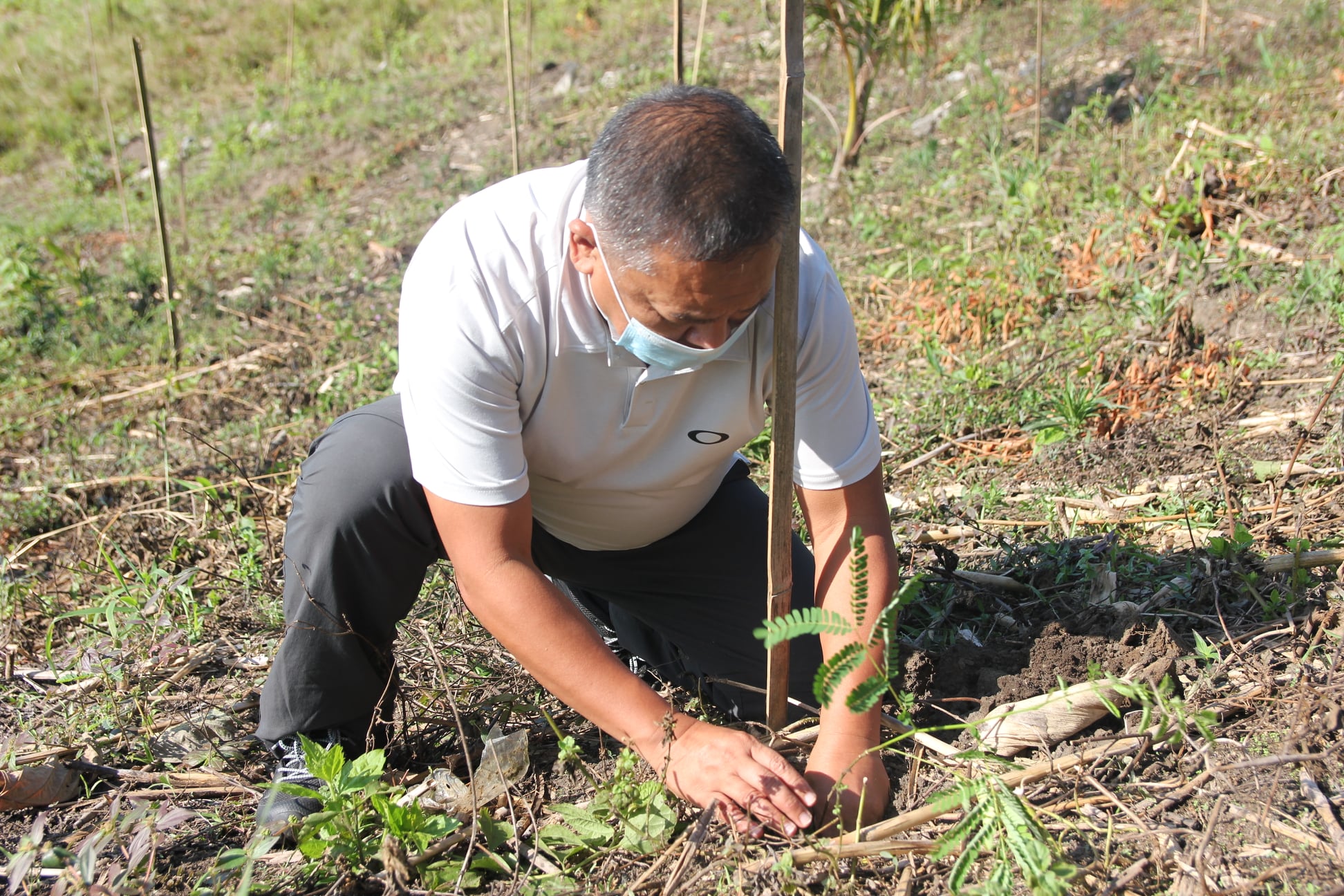 KORONADAL CITY, SOUTH COTABATO – The Department of Environment and Natural Resources (DENR) in Region 12 has strengthened ties with partner government agencies and local government units (LGUs) to intensify efforts in protecting and conserving the environment and natural resources (ENR) in the region.
A memorandum of agreement (MOA) was signed on Tuesday, April 20, 2021, by DENR-12 Regional Executive Director Atty. Felix S. Alicer and the heads/representatives of partner LGUs and agencies which signified the creation of the Soccsksargen (South Cotabato, Cotabato, Sultan Kudarat, Sarangani and Gensan) Environmental Protection Task Force.
RED Alicer stressed that the protection of environment cannot be done by the DENR alone and it needs the support of its partners.
“We can be more effective in environmental protection if we are joined by our partners. Without the support of our partners, especially from the Philippine National Police (PNP) and the Armed Forces, we cannot be effective in the implementation of ENR laws,” RED Alicer said.
In his message, DENR Undersecretary for Special Concerns Edilberto D. Leonardo emphasized that the main goal in intensifying the anti-illegal logging campaign is not only the apprehension of illegal loggers and forest products, but to avoid the actual cutting of trees which are still intact in our forests.
He said that the proactive approach, wherein the DENR personnel, police and military will safeguard the entry and exit points of protected areas, will be a great boost to forest protection.
According to RED Alicer, the primary consideration for the creation of the task force is the anti-illegal logging, but the Executive Order No. 23 series of 2011 provided that the scope of application expands to whole environmental crimes.
“We are not only limited to anti-illegal logging. We should also operate in other areas like mining, pollution and others,” RED Alicer said.
After the MOA signing, the partner agencies and LGUs expressed their full support for the success of the created task force which will be benefited by the present and future generations.
The Soccsksargen Environmental Protection Task Force is composed by the DENR; provincial governments of South Cotabato, Cotabato, Sarangani and Sultan Kudarat; Department of Interior and Local Government (DILG); Office of the Civil Defense (OCD); 6th and 10th Infantry Divisions of the Philippine Army; PNP; Philippine Coast Guard (PCG); PNP Maritime Group; Department of Agriculture (DA); Department of Tourism (DOT); National Commission on Indigenous People (NCIP); Philippine Ports Authority, Port Management Office for SOCSARGEN; Bureau of Customs (BoC); and National Bureau of Investigation (NBI).
It aims to optimize the ridge to reef ENR protection, management and conservation and strengthen partnership for the mobilization of stakeholders in ENR preservation and law enforcement.
The task force also seeks to harmonize the involvement and mandate of different concerned agencies/entities for the common goal of environmental protection and conservation in the Soccsksargen Region. | Photos by: DYIBalindong

GENERAL SANTOS CITY – The Department of Environment and Natural Resources (DENR) Region XII recently issued closure orders to 17 structures/business establishments in this city and in Polomolok, South Cotabato which are found to be operating within forestlands.
Community Environment and Natural Resources Officer (CENRO) of GenSan Ma. Elvira V. Lumayag stressed that the issuance of closure orders was made in compliance with the Memorandum issued by the Regional Executive Director, Atty. Felix S. Alicer pursuant to Section 20 and Section 78 of Presidential Decree No. 705 as amended, otherwise known as The Revised Forestry Code of the Philippines.
Lumayag said that the owners of the establishments were unable to present legal documents to support their operation in the area.
“Closure Orders were issued to these establishments following the inspection and orientation on laws governing the use of forestland conducted by the CENRO Gensan,” Lumayag said.
Prior to the issuance of the Closure Order, Lumayag added that her office conducted an inventory of businesses and establishments operating within forestlands to be included in its Base Map as one of its initiatives and innovations.
According to Lumayag, another batch of closure orders will also be issued as more structures and establishments are being inspected by the DENR.
Meanwhile, DENR-XII Regional Executive Director (RED) Atty. Felix S. Alicer emphasized the importance of harmony between development and environmental protection which can only be obtained through proper land use.
“In order to carry out the DENR’s mandate to protect and conserve the country’s environment and its natural resources, it is the duty of the department to regulate the utilization and development of our forestlands to prevent them from flourishing at the expense of our environment,” RED Alicer said.
RED Alicer also assured that the proponents will have the support of the DENR once their operations have been legitimized.
“We would like to send a message that we are doing our duty in managing our resources. If the establishment owners comply and submit all the necessary requirements proven to be in compliance with our governing laws, we will continue to support them in their endeavors,” he added. | (with reports and photo by CENRO GenSan) 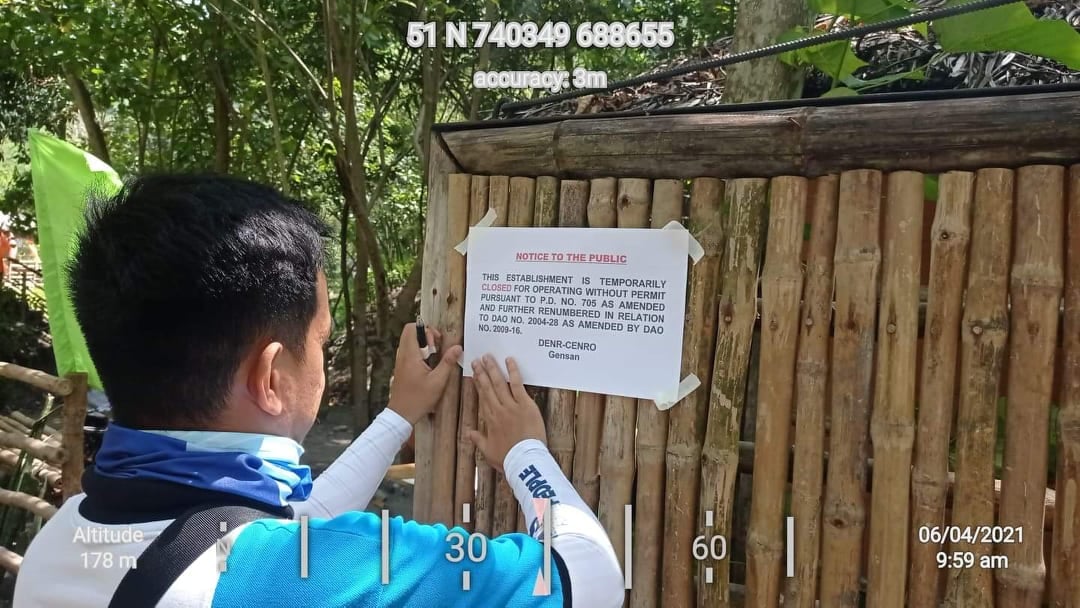