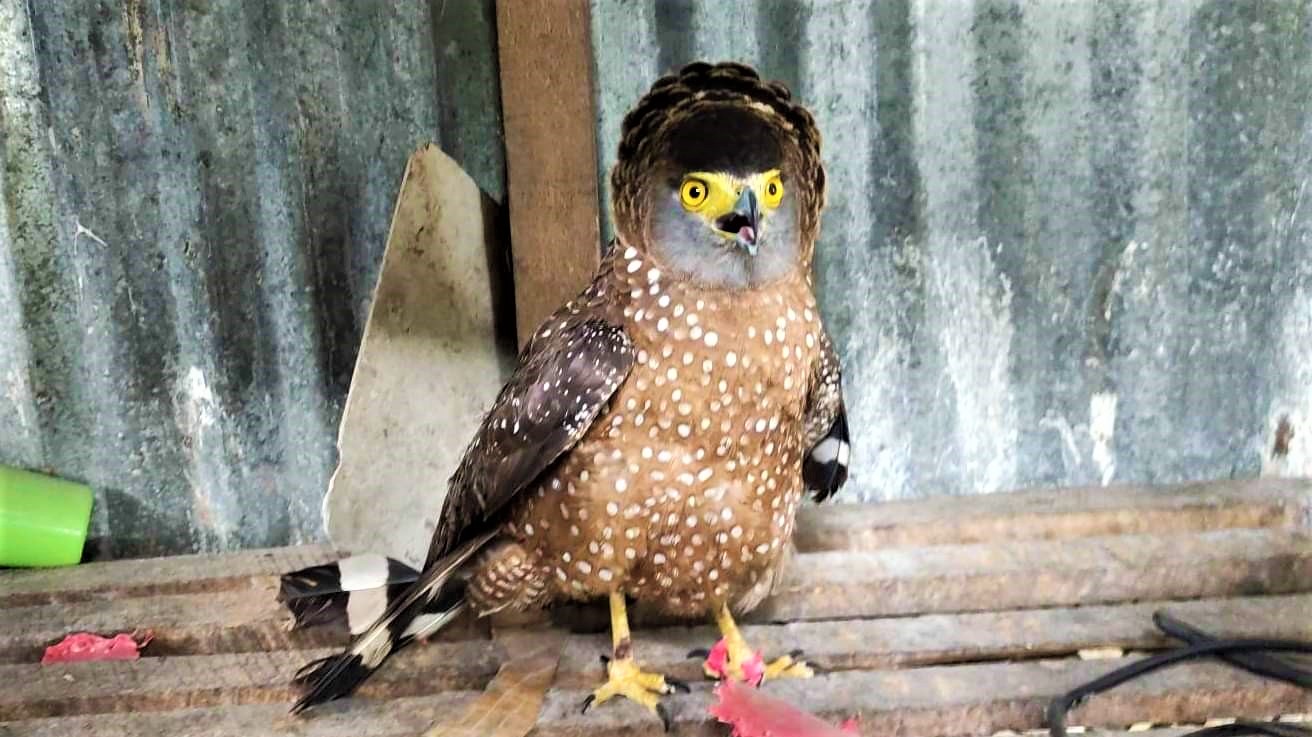 𝐓𝐀𝐂𝐔𝐑𝐎𝐍𝐆 𝐂𝐈𝐓𝐘, 𝐒𝐮𝐥𝐭𝐚𝐧 𝐊𝐮𝐝𝐚𝐫𝐚𝐭 – A juvenile Philippine serpent eagle was turned over on Friday (January 13) to the DENR Community Environment and Natural Resources Office (CENRO) of Tacurong City after it was rescued by a student.
CENR Officer Dr. Badjury H. Mustapha said that Keith Chester, a senior high school student from Notre Dame of Tacurong College, sought the assistance of police officers in Barangay New Carmen after he found the wildlife weak and unable to fly.
Patrolman Romnick Cana Valenzuela turned over the eagle to DENR-CENRO Tacurong City for proper handling and care.
“After its full recovery, we will release it back to its natural habitat,” Dr. Mustapha said. (With report and photos from DENR-CENRO Tacurong City) | RSCIGM
#TayoAngKalikasan #DENRNews 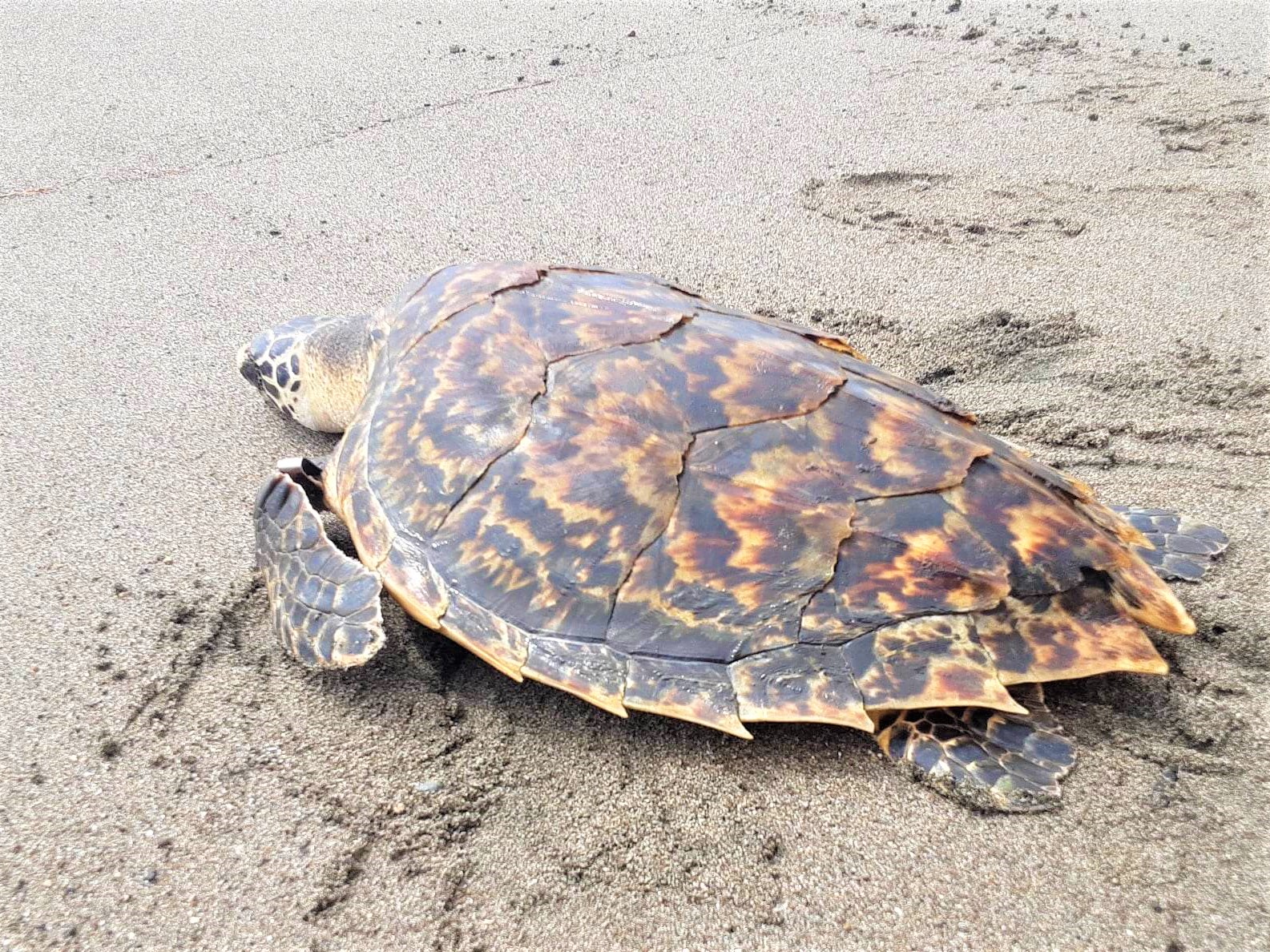 𝐆𝐋𝐀𝐍, 𝐒𝐚𝐫𝐚𝐧𝐠𝐚𝐧𝐢 𝐏𝐫𝐨𝐯𝐢𝐧𝐜𝐞 – Environmentalists here released on Tuesday (January 10) in Sarangani Bay a critically endangered female hawksbill sea turtle (Eretmochelys imbricata) after 74 days of recuperation from Pawikan Rescue Center in Barangay Burias, this town.
DENR Community Environment and Natural Resources Officer (CENRO) of Glan Dr. Rosalinda B. Cortez said the weak and stranded turtle, locally known as “pawikan,” was found and rescued by barangay officials along the shores of Barangay Big Margus during the height of tropical storm “Paeng” last October 28, 2022 which was eventually turned over to Protected Area Ranger Hajerol Diabal for proper care and handling.
During its rehabilitation, the pawikan was monitored constantly by Diabal together with two ‘bantay dagat’ Jomar Desin and Joel Don Driano with the guidance of Dr. Roy Mejorada, in-house veterinarian of Sarangani Bay Protected Seascape Protected Area Management Office (SBPS-PAMO).
Based on the assessment of CENRO Glan Ecosystems Management Specialist I Marivic G. Quisto, the sea turtle is healthy and fit for release.
The pawikan was tagged for the purposes of identification and monitoring of its feeding and nesting ground before it was released back to its natural habitat.
Hawksbill sea turtles are categorized as critically endangered species under DENR Administrative Order (DAO) No. 2019-09. Likewise, all wildlife in the Philippines are strictly protected under Republic Act 9147 also known as the “Wildlife Resources Conservation and Protection Act.” (With report and photos from DENR-CENRO Glan) | RSCIGM
#TayoAngKalikasan #DENRNews 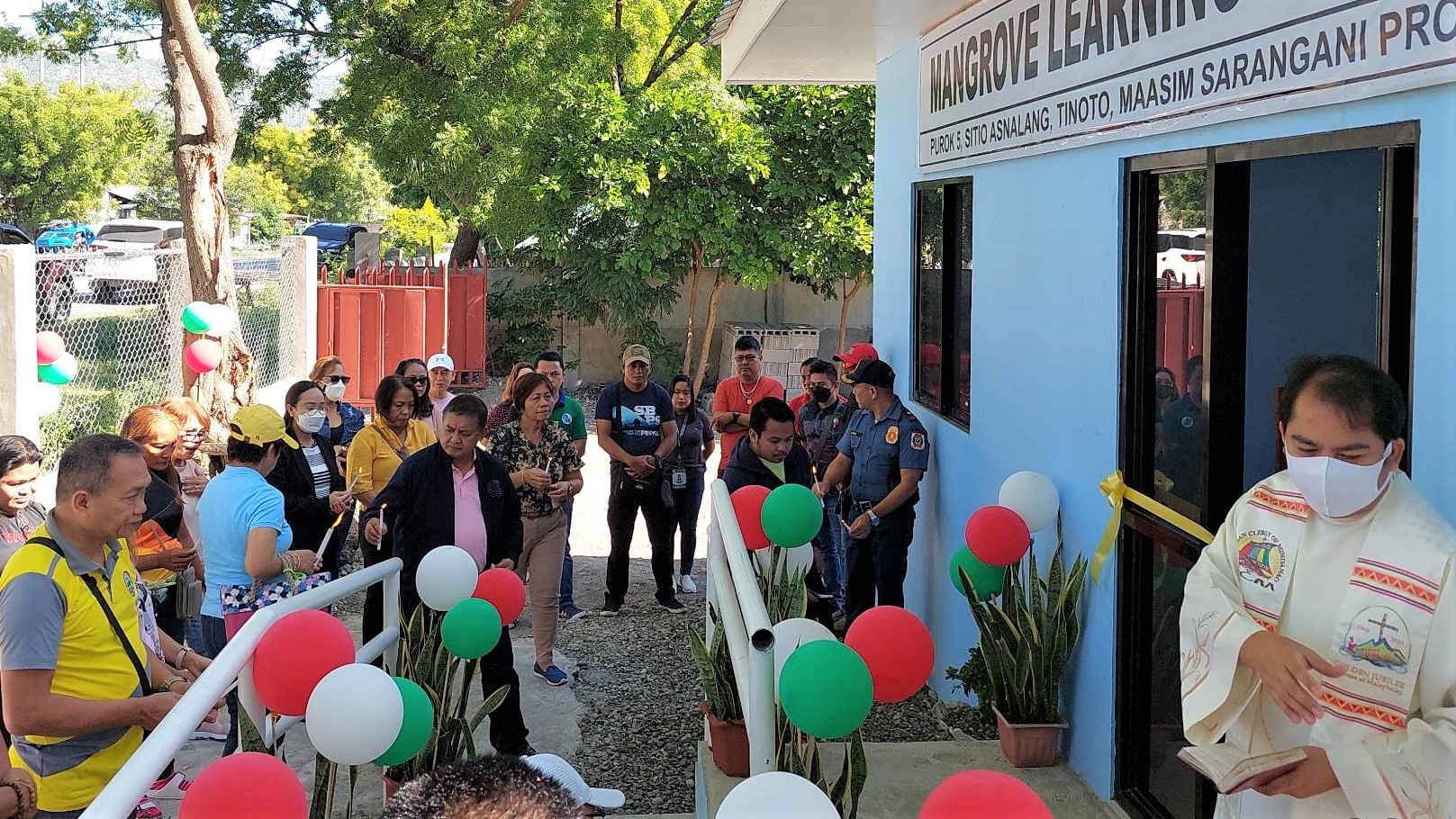 MAASIM, Sarangani Province – The Department of Environment and Natural Resources (DENR) Region XII together with the local government unit (LGU) here has officially launched on January 6 (Friday) the Pawikan Hatchery and Learning Center, Sanitary Landfill Administrative Office and Learning Center, and Mangrove Learning Center located in Barangays Lumasal, Kamanga and Tinoto, respectively.
The management of the pawikan hatchery, which was established by the DENR through CENRO Kiamba, was also turned over to the LGU. The three (3) facilities have been the center of biodiversity conservation and environmental protection for many years. Maasim is one of the active implementers of the ecological solid waste management through its program “BasuRaffles” and various mangrove propagules were also raised in its nursery to enrich the area’s mangrove forest.
DENR-12 Regional Executive Director Atty. Felix S. Alicer expressed during the turnover ceremony his appreciation and gratitude to the LGU for giving importance on environmental initiatives. "Today, we mark a history as we put our words into action for our environment. We encourage the resort owners and other stakeholders to be our active partners in protecting and conserving our upland and coastal resources,” he said.
DENR Sarangani PENRO Maria Elvira V. Lumayag thanked Mayor Zyrex Pacquiao for supporting the department’s programs and projects implemented in Maasim. On her part, Protected Area Superintendent of the Sarangani Bay Protected Seascape Joy C. Ologuin said “This does not mean that we ended our responsibility on coastal biodiversity in Maasim, in fact, this shows our stronger partnership and collaboration in all endeavors.”
Mayor Pacquiao said that they will continue to address the town’s environmental issues, especially the solid waste management. He also asked the support of the barangay LGUs and constituents to protect the wildlife species in Sarangani and take part in the implementation of the province’s “One Million Trees” project.
The event was also attended by Kiamba CENR Officer Abdul D. Cariga, Sarangani Governor’s representative Atty. Stephany Velasco, DILG Provincial Director Samuel Camaganacan, USAID-Safe Water Watershed and Resource Management Officer Orson Sta. Cruz, some DENR-12 and EMB-12 personnel, and the barangay and municipal officials of LGU Maasim. (With report and photos from DENR-CENRO Kiamba) | RSCIGM
#TayoAngKalikasan #DENRNews 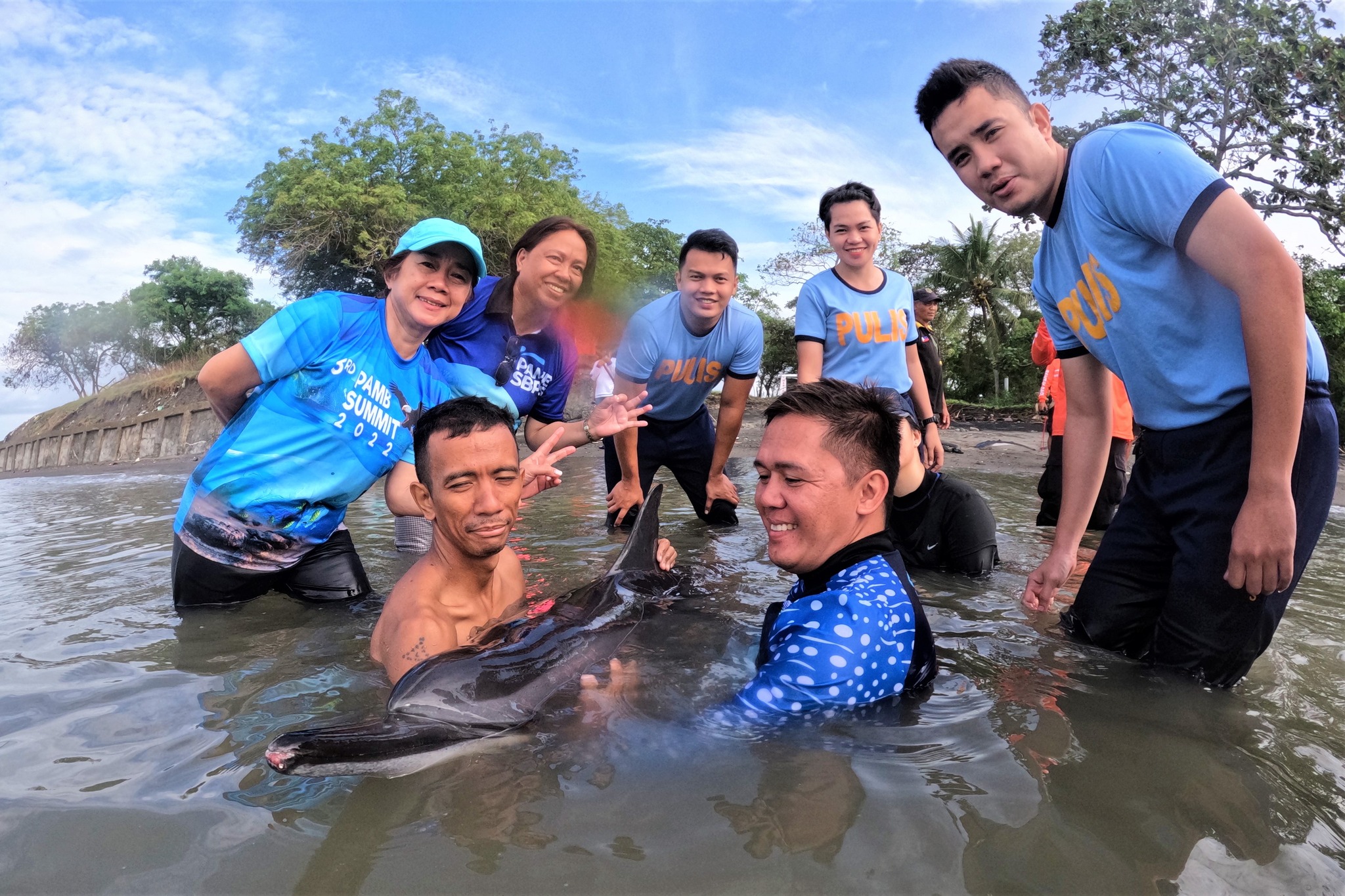 ALABEL, SARANGANI PROVINCE - Local rescuers rejoiced as the stranded spinner dolphin "YoYo" was released back to Sarangani Bay Protected Seascape (SBPS) on December 9 after three (3) days of continuous rehabilitation made possible through the joint efforts of the BFAR, DENR, LGU Gensan, LGU Alabel, PNP Maritime, Philippine Coast Guard and Alsons Aquaculture Corporation.
The rescued dolphin was initially stranded at Brgy. Bula, General Santos City on the morning of December 6, where it was found and reported by local residents. Members of the SBPS Megafauna Response Team (MRT) from the DENR, PNP, LGU Gensan, BFAR and Philippine Coast Guard immediately responded and tried rehabilitating the animal on site.
After the first day of rehabilitation, as the team was preparing the rescued dolphin's transfer to a rehabilitation tank, the animal swam away from the shore. However, knowing its weakened condition, the MRT remained on alert for a possible re-stranding.
Roughly two hours later, the same dolphin was found stranded along the shores of Lower Makar, Gensan. The MRT quickly responded to the report and facilitated the animal's transfer to a Circular Rehabilitation Tank offered by the Alsons Group of Companies through Director Miguel Rene A. Dominguez.
"The dolphin was unable to swim and maintain its buoyancy. We decided that it must be brought to an ex situ rehabilitation site to administer the necessary medical attention," SBPS Protected Area Management Office (PAMO) Resident Veterinarian Dr. Roy Mejorada said.
The MRT continually monitored and rehabilitated the animal until it was deemed fit for release. On the morning of December 9, 2022, members of the SBPS-MRT bade goodbye to Dolpin "Yoyo" as they released it back to the waters of Sarangani Bay.
Protected Area Superintendent (PASU) Joy Ologuin thanked the SBPS-MRT for their active efforts in the animal's rescue and the Alsons Group of Companies for providing the needed logistics.
"We are also thankful that Sarangani Bay's coastal communities are aware of the need to conserve and protect our local wildlife," remarked PENRO Sarangani Maria Elvira Lumayag. | With report and photos from PAMO-SBPS
#TayoAngKalikasan 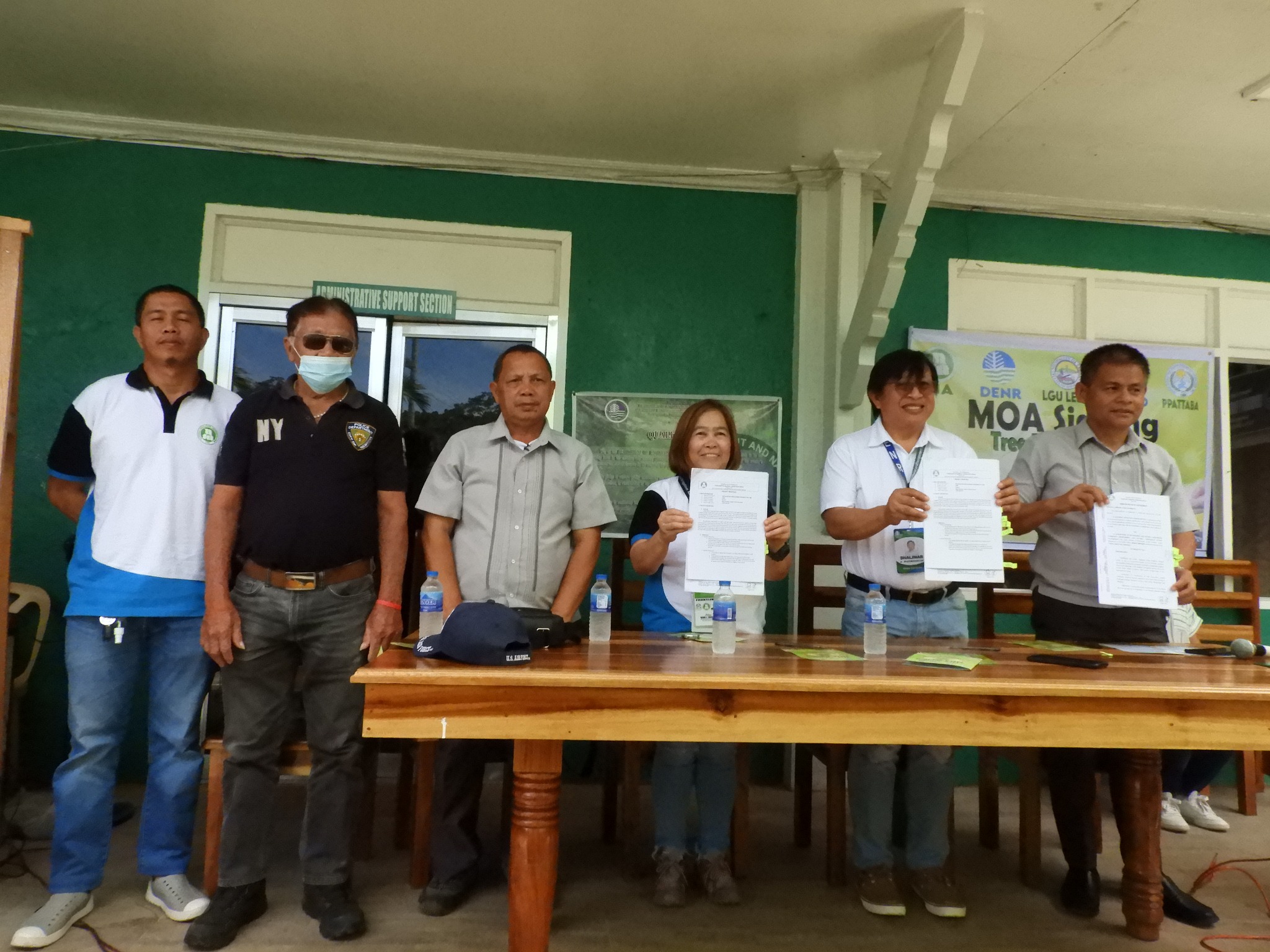 The Community Environment and Natural Resources Office (CENRO) Kalamansig headed by Forester Iskak G. Dipatuan and Provincial ENR Officer of Sultan Kudarat Shalimar A. Disomangcop together with the National Irrigation Administration – Sultan Kudarat Irrigation Management Office (SKIMO) headed by Engr. Gina L. Lozano signed a memorandum of agreement (MOA) for the Tree Replacement Program between DENR – NIA – DSWD on October 24, held in CENRO Kalamansig.
It can be remembered that NIA- SKIMO proposed irrigation projects to improve the water supply of local farmers for their farms as the main source of their income.
These projects however affected some 1,424 trees of various species located at Brgy. Pansud and Barurao II, Lebak, Sultan Kudarat. With the signing of the said MOA, the planting of 100 seedlings for 1 cut indigenous tree and 50 seedlings for 1 cut planted tree is guaranteed as per DENR Memorandum Order 2012-02 dictates.
In his speech of commitment, CENR Officer Iskak Dipatuan encouraged all stakeholders to act, to ensure the sustainability of the tree replacement project with community participation associated with understanding and commitment to the application of technological innovation.
“The NIA- SKIMO is the first to comply with the JMC No. 01 series of 2014. This convergence between the DENR and NIA, by this MOA, is a manifestation of pursuing the AmBisyong Filipino 2040 towards Matatag, Maginhawa at Panatag na Buhay. ‘I would like to extend my gratitude to NIA Management and Staff and for the initiative of CENRO personnel for making this possible,” he said.
Meanwhile, PENRO Shalimar Disomangcop cited that this project's objective is to guarantee the sustainability of environmental resources.
“This momentous event aims to promote poverty alleviation through the incentive-based involvement of poor communities in the replacement of trees cut for government infrastructure projects,” he said.
Said activity is under DAO 2018-16 “Guidelines in the Processing and Issuance of Permits on the Removal and Relocation of Trees Affected by DPWH Projects”, DAO 2020-06 “Amending Certain Provisions and Expanding the Coverage of DENR Administrative Order No. 2018-16 “Guidelines in the Processing and Issuance of Permits on the Removal and Relocation of Trees Affected by DPWH/NGCP Projects” and JMC No. 01 Series of 2014 “Guidelines for the Implementation of the DPWH-DENR-DSWD Partnership on the Tree Replacement Project”.| With report and photo from CENRO Kalamansig IO Designate Aisa Abdulazis