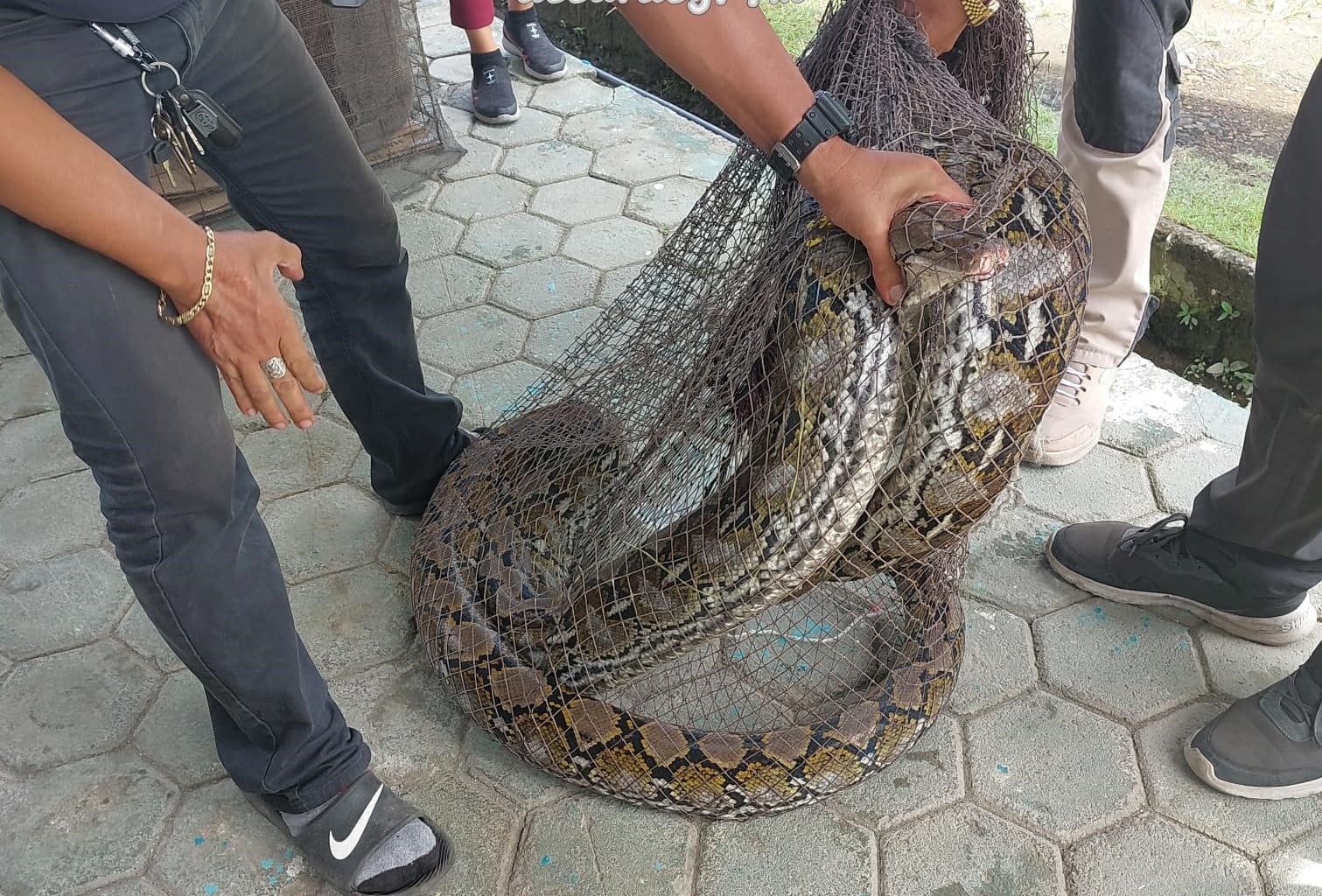 A Reticulated Python was turned over to Community Environment and Natural Resources Office (CENRO)-General Santos City, on January 4, 2022.
The python that was found within the compound of the City Social Welfare and Development Office (CSWDO) weighs 40 kilograms and has a length of 12 feet. Said python was captured by Ariel Liwag, Ronald Banio, and Reann Lasib of City Security Division of General Santos City, reported and immediately responded by personnel of City ENRO of GenSan.
Together with Maria Katherine Lopez, Cheryl Galo, and Maryflor Cameros of City ENRO, the python was received by CENRO GenSan in Buayan, and will be released back into the wild after securing a certificate from a registered veterinarian. (Reports and photos from MJAZULITA-UGARTE, CENRO GSC, Information Officer Designate) 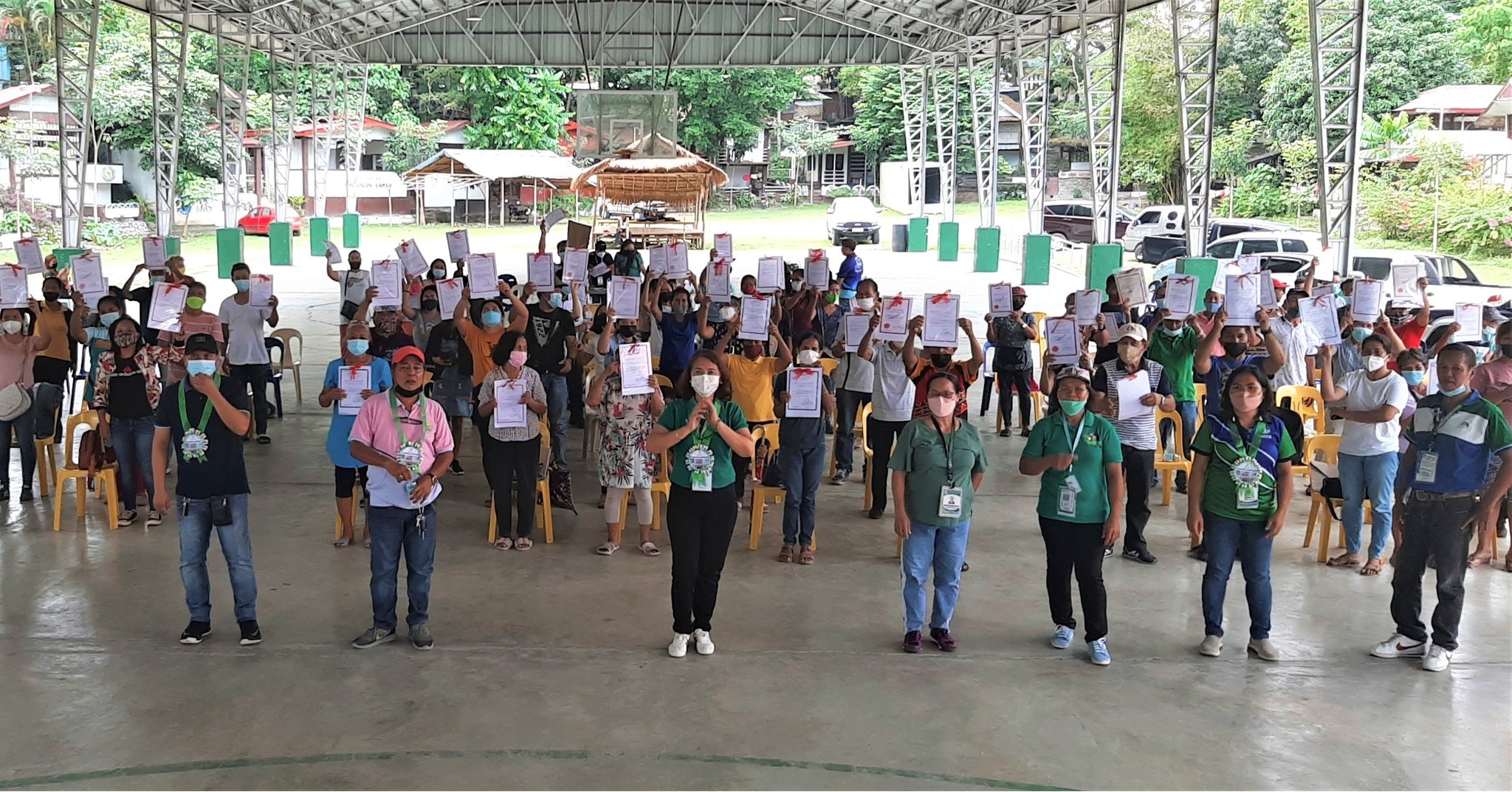 ALABEL, SARANGANI PROVINCE – A total of 182 land titles were awarded to beneficiaries here on December 13 by the DENR Community Environment and Natural Resources Office (CENRO) of Glan and its partners.
CENR Officer Dr. Rosalinda B. Cortez said that they awarded the Residential Free Patents (RFPs) to beneficiaries from five (5) barangays, namely: Poblacion with eight RFP applications processed; Alegria with 25; 18 in Tokawal; Spring with 78; and 53 in Bagacay.
Alabel Mayor Vic Paul M. Salarda expressed his gratitude to the DENR, particularly Provincial ENR Officer Renato C. Domingo and Dr. Cortez, for their efforts in the awarding of titles which would increase the town’s assets and comprehensive land management.
He also congratulated the beneficiaries and reminded them to suitably manage and develop their lands.
Earlier this month, 143 RFPs were awarded to beneficiaries in Malungon town and 17 Patents were distributed by the office to the recipients in Glan. (With report from JCDumanaon, CENRO Glan Information Officer Designate) 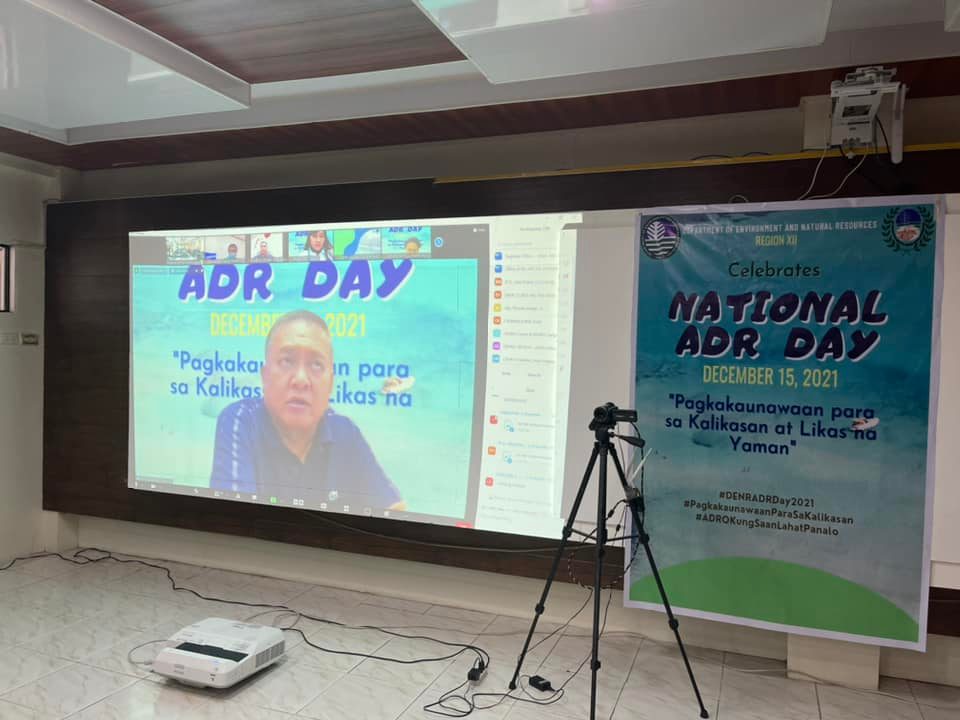 In the continuous efforts of DENR XII to address the need of mediation and conflict resolution among parties involved in the disposition of land claims and conflicts, the department through its Legal Division celebrated the National Alternative Dispute Resolution (ADR) Day 2021 with the theme, “Pagkakaunawaan para sa Kalikasan at Likas na Yaman.” on December 15, 2021 at the DENR XII Function Hall, Koronadal City and via Zoom online platform.
The goal of the intensified conduct of ADR in Region XII is to become part of next year’s Top Performing Region in terms of ADR Program.
In his Opening Message, DENR XII Regional Executive Director (RED) Atty. Felix S. Alicer emphasized the important roles of the Alternative Dispute Resolution Officers (ADRO’s) in the ADR program.
“The best solution is the win-win solution in terms of land conflicts. The ADRO’s needed to be trained and should be knowledgeable of the laws in dealing with the case at hand.
As ADRO’s, they should familiarize the basic principles of law. ADR is a skill in mediation. You have that skill if in a particular group, you could pacify it then you should have the listening skills –the ability to listen. May we improve the ADR process.” He said.
RED Alicer also emphasized the significance of decision-making on legal matters.
On the other hand, the focal person for DENR XII ADR-Legal Division, Atty. III, Atty. Mae Fretzel Deadio presented the accomplishments and the updates on the benchmarking for DENR XII ADR. She also facilitated the awarding of certificates of recognition and the winners for the best ADRO’s.
The following winners are: Second Placer – Ms. Annie Clair Tejam of CENRO Banga, First Placer – Mr. Wenie Vergara of CENRO Glan, and the Best ADRO – Engr. Taric Pananggilan of CENRO Kalamansig who had six proceedings, to which out of those six, concluded two successful proceedings.
Atty. Deadio also highlighted that for the Calendar Year 2021-2022; only DENR XII has conducted ADR proceedings among other regions despite the global pandemic.
Also present during the program were some of the PENRO’s, CENRO’s, and the newly-designated ADRO’s who also celebrated ADR Day virtually.
The ADR procedure was implemented by the department pursuant to Republic Act 9285 or the Alternative Dispute Resolution Act of 2004 and Executive Order 523, instituting the Use of ADR in the Executive Department of the Government.
ADR is necessary for the operations of DENR since December 2016 with the issuance of DENR Administrative Order 2016-30 calling for the establishment of mechanisms and tools for ADR in the disposition of land claims and conflicts, the organization of a pool of ADROs, and the creation of a committee and secretariat tasked to implement the ADR process.| (With photos from RSCIG) #DENRADRDAY2021 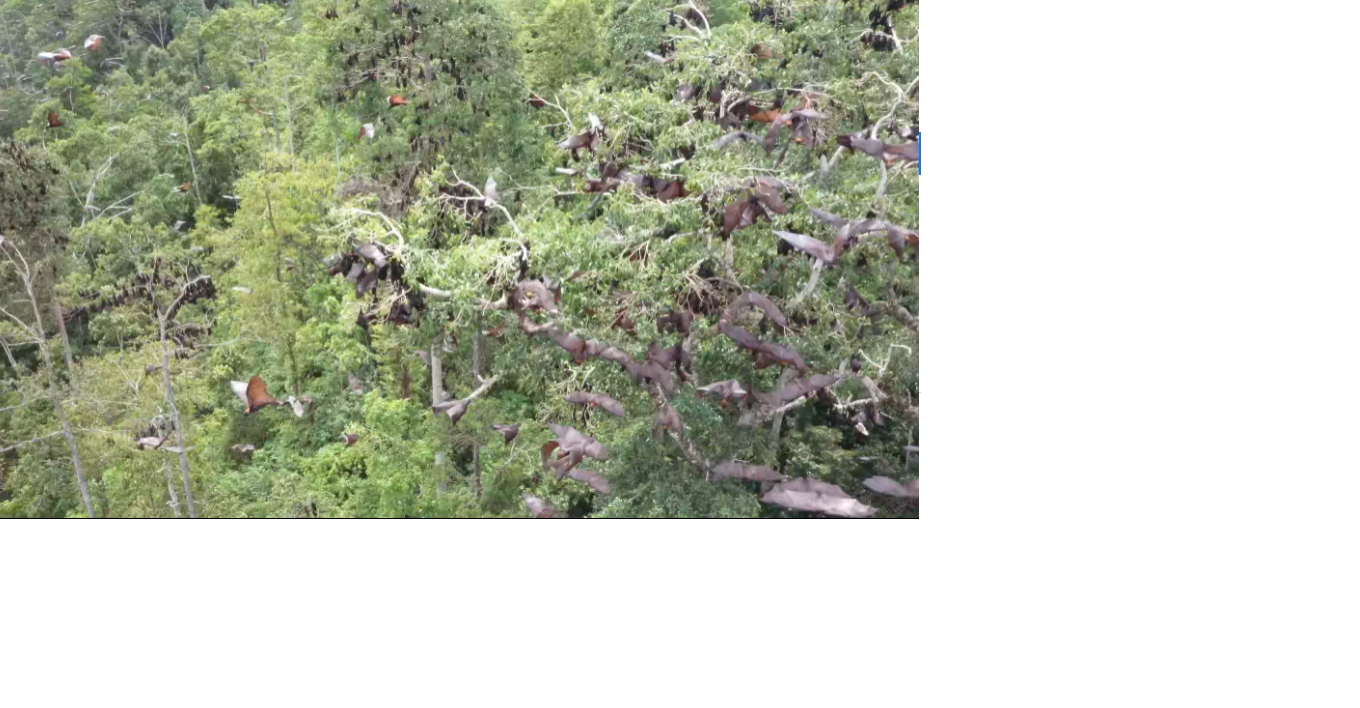 The Community Environment and Natural Resources Office (CENRO) Midsayap recently conducted monitoring activity of a newly discovered roosting site of flying foxes. The site was found on a forest part of Brgy. Malagap, Banisilan, Cotabato Province.
Hon. Carlos Benedicto, the Punong Barangay of Malagap, said that the wildlife species were not originally living in their area, but in a neighboring barangay of Guiling in the Municipality of Alamada. He also added, after knowing that flying foxes are settling in their sitio, he immediately declared for the protection of these flying mammals as well as its habitat.
As to the initial assessment by the monitoring team, the sighting of the flying foxes were more or less 50,000 colony and there is a high probability that Large Flying Fox (Pteropus vampyrus) and the endemic Golden-Crowned Flying Fox (Acerodon jubatus) which is known to be endangered within the roost.
Meanwhile, CENRO Midsayap will continue to monitor and conduct assessment to know more of these flying foxes and later work with partner organizations to secure their existence and maintain its vital role in our ecosystem. (With video and report from designated IO Adiel Pamikirin)