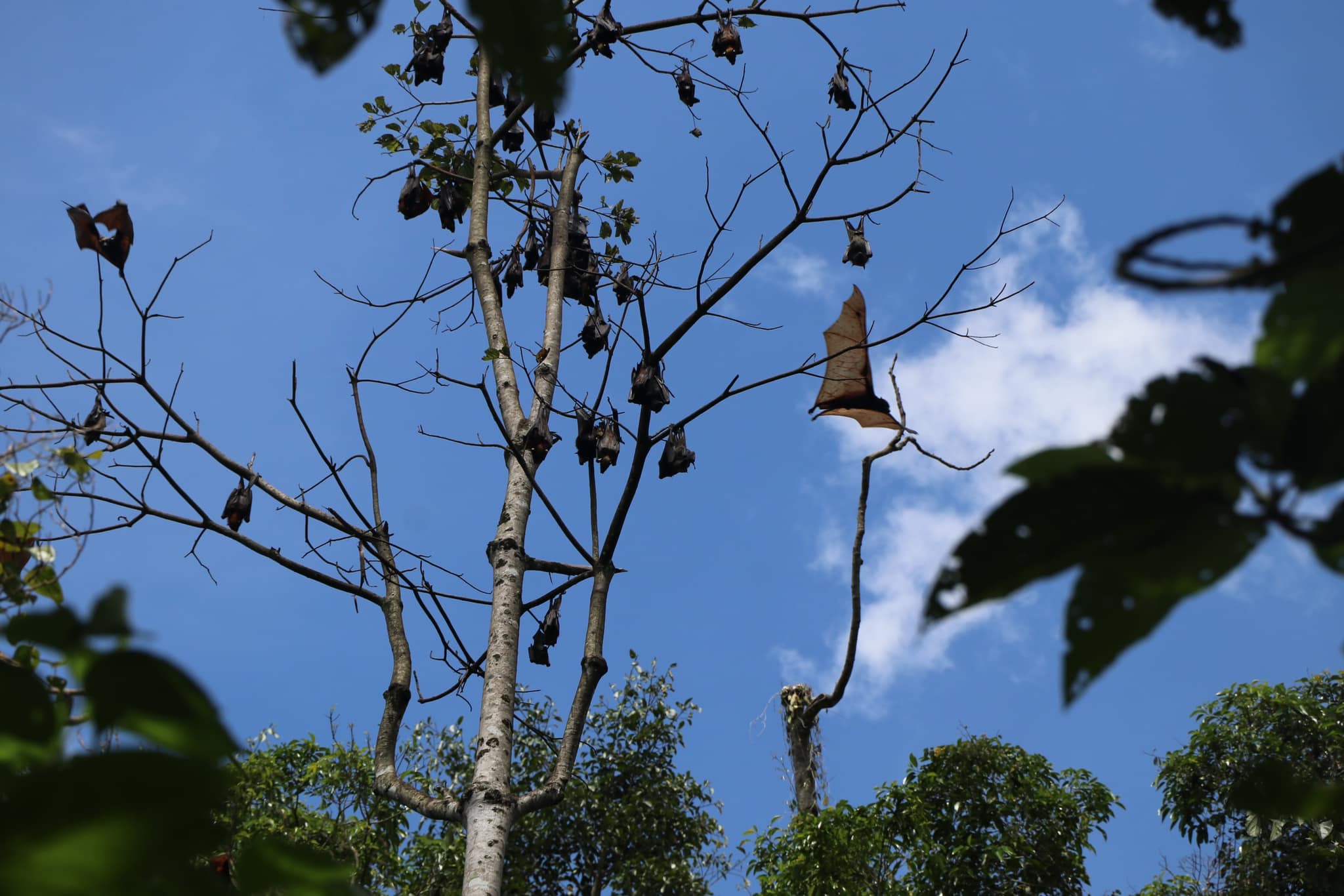 The DENR-12 Regional Strategic Communication and Initiatives Group (RSCIG) went to the far-flung area where the Flying Fox Bats thrive. Taking into consideration the area’s confidentiality, the team guided by Senior Biologist Andrew Ross Reintar of the Philippines Biodiversity Conservation Foundation, Inc. (PBCFI) carefully traversed the forest to document the thriving population of the said flying mammals with the help of the Community Environment and Natural Resources Office (CENRO) Midsayap, the area’s barangay local government unit (BLGU) key officials, and the Municipal Environment and Natural Resources Office (MENRO) of Banisilan.
CENRO Midsayap regularly conducted monitoring activities of newly-discovered roosting sites of flying foxes to asses the area and the possible threats toward the flying mammals. It was found that there are three kinds of flying foxes that thrive in the snags of trees namely the Island Flying Fox (Pteropus hypomelanus), the Large Flying Fox (Pteropus vampyrus), and the endemic Golden-Crowned Flying Fox (Acerodon jubatus), known to be critically endangered under the Philippine Red List. The data gathered by the monitoring team suggested that the sightings of the flying foxes were more or less 50,000-60,000 bats for which there is a significant number of the endemic Golden-Crowned Flying Fox of about 1,500.
In an interview with the Punong Barangay, the wildlife species were not originally living in the area, but in a neighboring barangay of Municipality of Alamada. Upon knowing that flying foxes were settling in the area, the BLGU declared an Ordinance for the protection of the flying mammals as well as their habitat.
Many locals and other people still have misconceptions about the Flying Fox Bats or locally termed Kabog as other people believe they bring bad omen to those who come face to face with these organisms. Andrew Ross Reintar, Senior Bioligist of the Philippines Biodiversity Conservation Foundation, Inc. (PBCFI) emphasized the significance of the species of bats found in the area as they are natural tree planters, and play an important role in preserving plant diversity by carrying and pollinating seeds of plants from one place to another, they are the source of the exchange of genetic diversity.
“These flying fox bats also help control pests, they are our friends. The Golden flying foxes are also lumads or natives as they are only found in the Philippines. The BLGU should know the significance of these mammals by gathering information through research and by educating the people about the species, lobbying the protection in the area through many platforms of the BLGU, or the LGU and DENR in their critical habitats, there should be a clear policy as well as IEC campaign to eradicate the misconceptions on these organisms.” Reintar said.
With the recent COVID-19, bushmeat trade and hunting of these are not allowed through the efforts of LGU and the enforcement led by the barangay tanod. By policy, it is prohibited to consume Flying Fox Bats as they may be possible carriers of diseases. Not only from the flying foxes but it could happen the other way around if people get in touch with them improperly.
Antonio Calonge, Municipal Environment and Natural Resources Officer (MENRO) of Banisilan said that the LGU pushes for a balanced ecosystem by preserving the flying mammals as the spreaders of plant seeds. “Protektahan natin ang ating kalikasan” (Let us protect our environment) as what MENRO Calonge emphasized in his interview.
In support, the Brgy. Captain said in his interview that the BLGU is upholding activities such as tree-planting and seminars about the significance of the Flying Fox Bats in the area and the possible sanctions to those who continue and wish to hunt the flying mammals.
CENRO Midsayap also continues to monitor and assess the existence of these flying foxes and partners with other civic organizations such as the Philippines Biodiversity Conservation Foundation, Inc. (PBCFI) to secure their existence and maintain their vital role in our ecosystem.
The PBCFI helps the LGU, DENR, and other agencies from research to IEC campaigns, through policy development and, management of protection and conservation of species and habitat. They do not only partner with CENRO Midsayap, but also with PENRO Cotabato, and the DENR-12.
Cotabato’s Flying Foxes are proof that deep in the remaining forests of Mindanao, there are still precious gems hidden not in a form of stones or other elements of the Earth. Like what one of the locals emphasized to the RSCIG team, “Halungan ang kalasangan kag ang mga kabog kay sila ang aton kayamanan dire” (Let’s take care of our forests and the Flying Fox Bats because they are our treasures). We, as dwellers of this planet, could do so much by taking part in this initiative. | RSCIGJ

A total of 2,000 Bamboo culm cuttings (Bayog and Afus) were planted at Banga riverbanks in line with the Bamboo Friday initiated by Banga CENR Officer Larry P. Curias.
“Bamboo Friday” is a weekly activity conducted every Friday which was initiated by CENR Officer Larry P. Curias in relation to the RIVERs for Life and the National Greening Program (NGP).
Said activity aims to give awareness of the importance of planting bamboo along the riverbanks to prevent soil erosions, landslides, and balance oxygen and carbon dioxide in the atmosphere.
When he assumed office, CENRO Curias emphasized that “bamboo-growing every Friday will become a weekly activity all throughout the Banga River so that the Department of Environment and Natural Resources (DENR) presence in the community will be visible and felt.
“A little progress each day adds up to a big result,” he said.
Meanwhile DMO IV Designate/Sr. EMS Franklin M. Lebrilla highlighted that “Bamboo is a green footprint that can help shape our future.
“It is a valuable partner in fighting climate change than the average hardwood tree. It is strong yet lightweight, versatile and easy to work with and could last for several seasons,” he added.
Tree guards were also mounted in the planted bamboo to protect them from stray animals in the area.
Furthermore, the said activities were attended by CENRO Banga employees and various agencies and partner stakeholders such as PO beneficiaries, Barangay Local Government Units (BLGUs), Municipal Environment and Natural Resources Office (MENRO), Department of Education (DepEd), Philippine National Police (PNP), MLhuillier, ENRA Frontline Course Batch 109, Philippine Army, SUMIFRU, 1204th CDC Koronadal City, and Kolon Datal Eagle Club.| with report and photo from Cenro Banga IO Designate Alnayah Mohammad Ayman 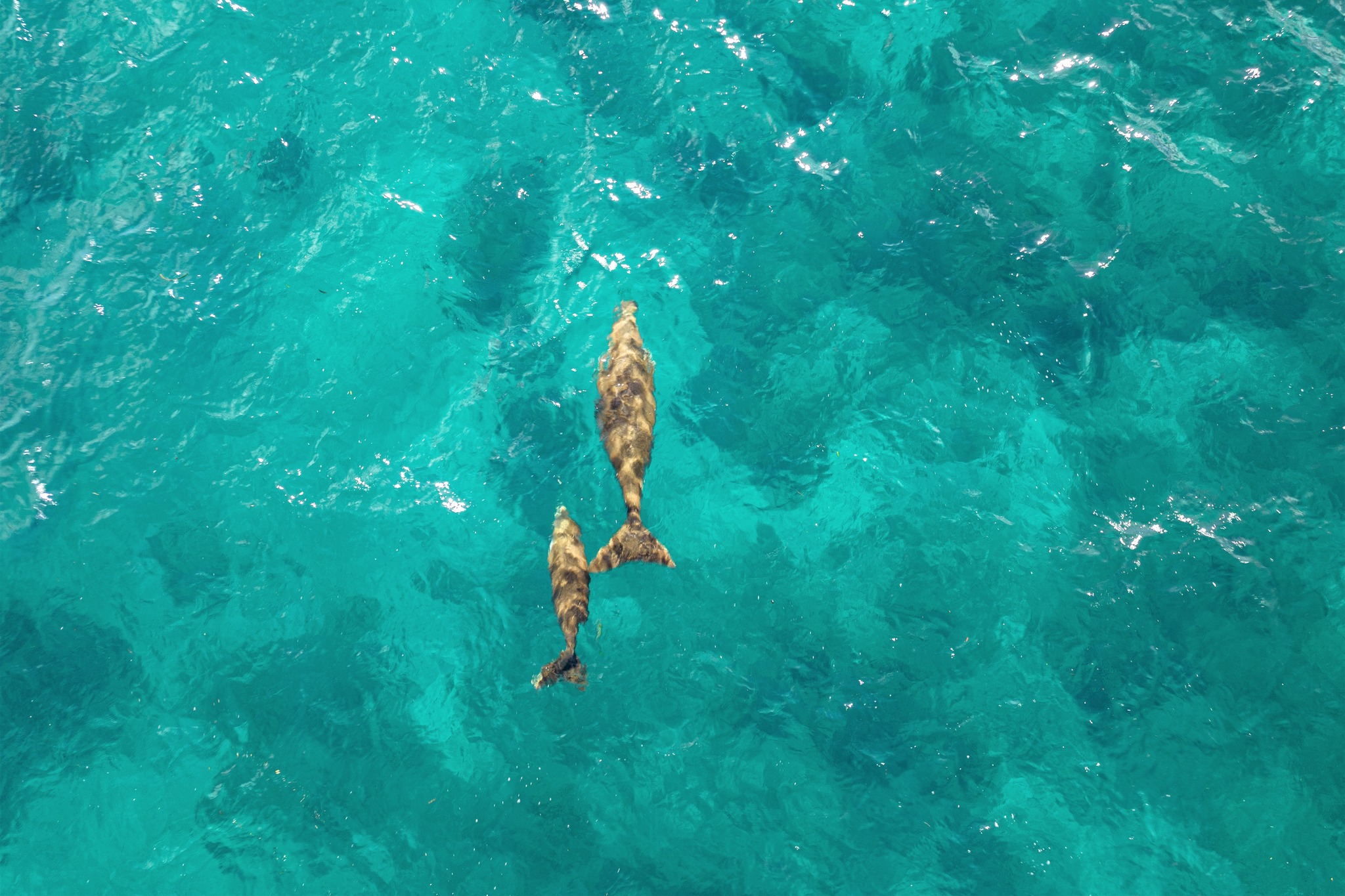 Members of the Sarangani Bay Protected Seascape (SBPS) dugong monitoring team have reported sightings of six sea cows, four of which were two pairs of mother-calf, off Sarangani Bay during their three-day watch in the bay.
Maria Elvira V. Lumayag, provincial environment and natural resources officer (PENRO) of DENR Sarangani, said that the sea cows, commonly known as dugong, were spotted by the drone camera used by the team during their regular monitoring activity which started on Wednesday, August 31.
Dr. Roy Mejorada, SBPS in-house veterinarian, said that on Thursday, September 1, a mother dugong and its calf were spotted swimming along the shallow waters of Barangay Gumasa, Glan. "When we zoomed in the footage, we were amazed to see that the calf was breastfeeding. This was the first time that we have documented this behavior in SBPS," he said.
The team also sighted the same mother-calf dugong pair accompanied by another mother-calf pair on the Friday, September 2, resting in the nearby coral reefs. A lone male dugong was also spotted by the team swimming not too far away from the two mothers, including the solitary dugong in Barangay Taluya, Glan.
SBPS Assistant Protected Area Superintendent Cirilo Lagnason, Jr. said "This might be the same herd of dugongs that we have documented last March 2022 in Glan.” Lagnason added that the sea cows frequent sightings in the SBPS mean that the bay is an important nursery habitat for the dugongs and their calves.
PENRO Lumayag has urged the public to actively participate in the conservation efforts for SBPS and emphasized that it is everyone’s responsibility to work together and ensure that the seascape will remain as a safe haven for dugongs in the years to come. | With report and photos from PAMO-SBPS
#DENRNews #TayoAngKalikasan 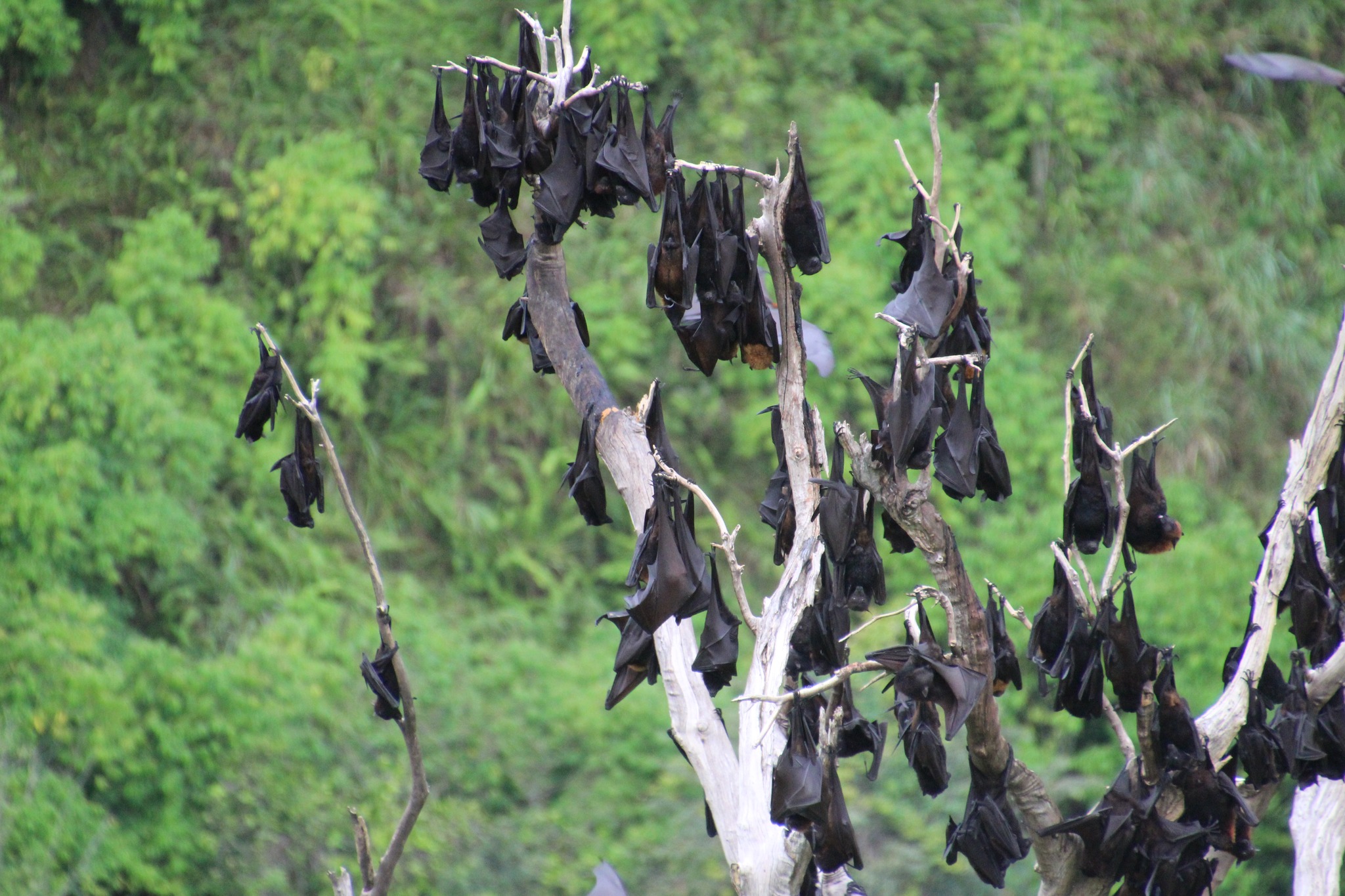 The Community Environment and Natural Resources Office (CENRO) of Matalam, Cotabato conducted the 3rd Quarter Flying Fox Monitoring at Kulaman Valley, Arakan, Cotabato together with the practicumers taking up Bachelor of Science in Forestry in Cotabato Foundation College of Science and Technology (CFCST).
Two roosting sites were monitored on the said activity with 37 snag trees.
An estimated 4,000 Island Flying Fox (Pteropus hypomelanus) and Large Flying Fox (Pteropus vampyrus) were counted during fly/out exit count using estimation and clickers.
The idea of conserving bats is not new to the communities but it links with greater initiatives that are already familiar not only to local communities but also to ordinary individuals. It is also connected to forest conservation and restoration anchored to one of the department’s governing laws known as Republic Act 9147 or the Wildlife Resources Conservation and Protection Act. This law emphasizes the conservation and protection of wildlife species and their habitats with an aim to promote ecological balance and enhance ecological biodiversity. (with report and photo from Ivy Cinconiegue, CENRO Matalam IO Designate)
#protectwildlife
#TayoAngKalikasan 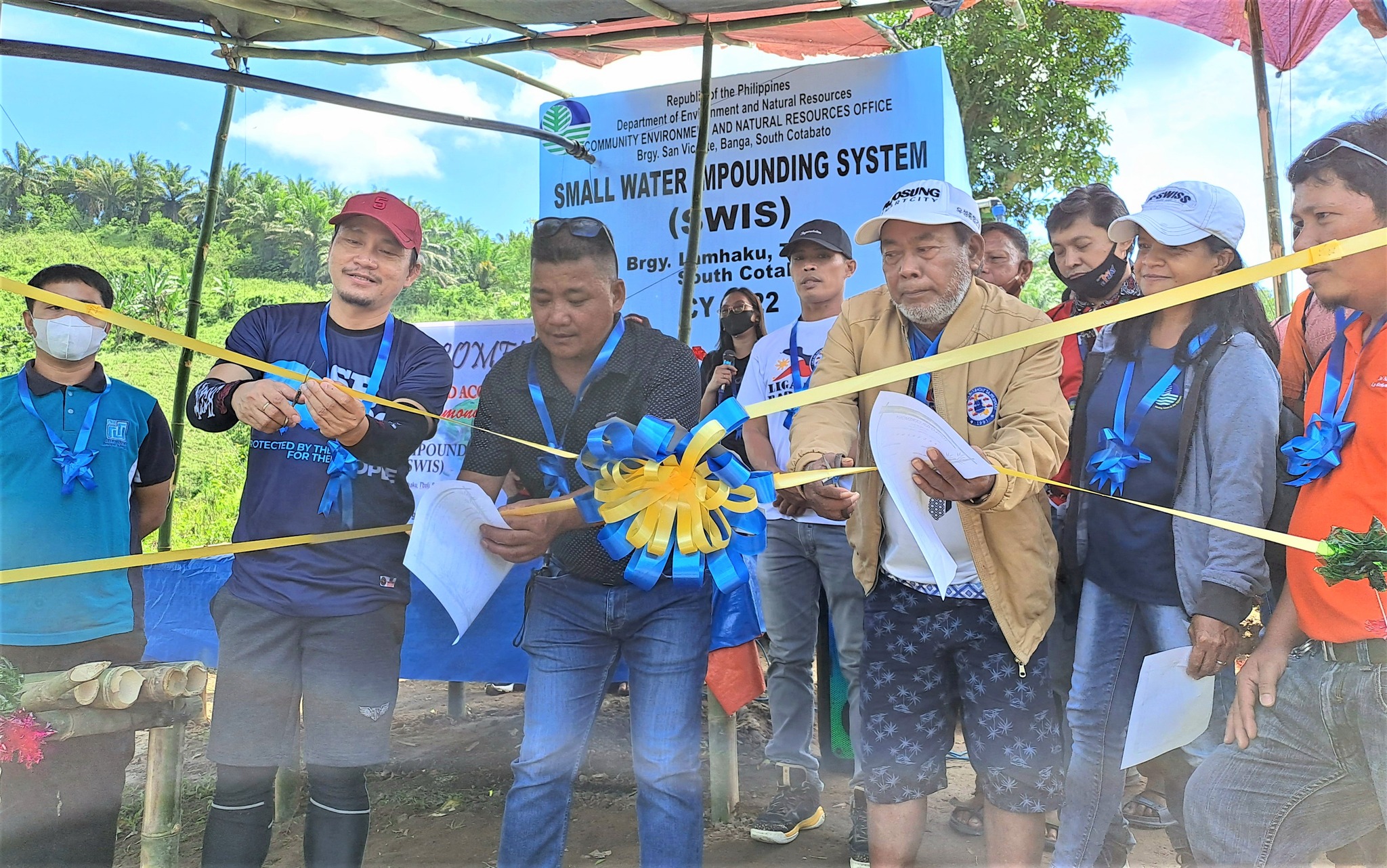 The Community Environment and Natural Resources Office (CENRO) – Banga officially turned over the Small Water Impounding System (SWIS) to the community of Brgy. Lamhaku, T’boli, South Cotabato thru its People’s Organization (PO) Chairman Jonathan Caguisano on Friday, August 19.
Speaking with the beneficiary, CENR Officer Larry P. Curias emphasizes that this is the first time that CENRO Banga has implemented SWIS.
“You are the first beneficiaries of this project. On behalf of our Regional Executive Director (RED) Atty. Felix S. Alicer and PENR Officer Radzak B. Sinarimbo, we are proud to turn over this project to you and we pray that this will help the National Greening Program (NGP) beneficiaries and the local community. We encourage everyone to maintain and take care of the water source including the area”.
Meanwhile, Brgy. Chairman Kosol A. Minding and PO Chairman Jonathan Caguisano of Lamhaku IP Farmers Association expressed their gratitude to the DENR.
“We are lucky to have this project. We thank the CENRO Banga because without them, this project will not be possible” they stressed.
Also present during the ceremony were CENRO's Chief Conservation and Development Section (CDS) Jeremy P. Empredo, NGP Coordinator Gemma N. Olivo, Engr. Remo Zaragoza III, Indigenous Person Mandatory Representative (IPMR) Junito S. Ben, Barangay Officials, and CENRO Banga personnel. (with report and photo from CENRO Banga IO Designate Alnayah D. Mohammad Ayman)